From Moselkern through the romantic Eltz valley and its steep vineyards

Beautiful, lonely, majestic and surrounded by water, Eltz Castle is located a bit away from the Moselle valley. It has never been destroyed by war. Its 500-year history of construction unites all styles, from the Romantic period to the early Baroque. 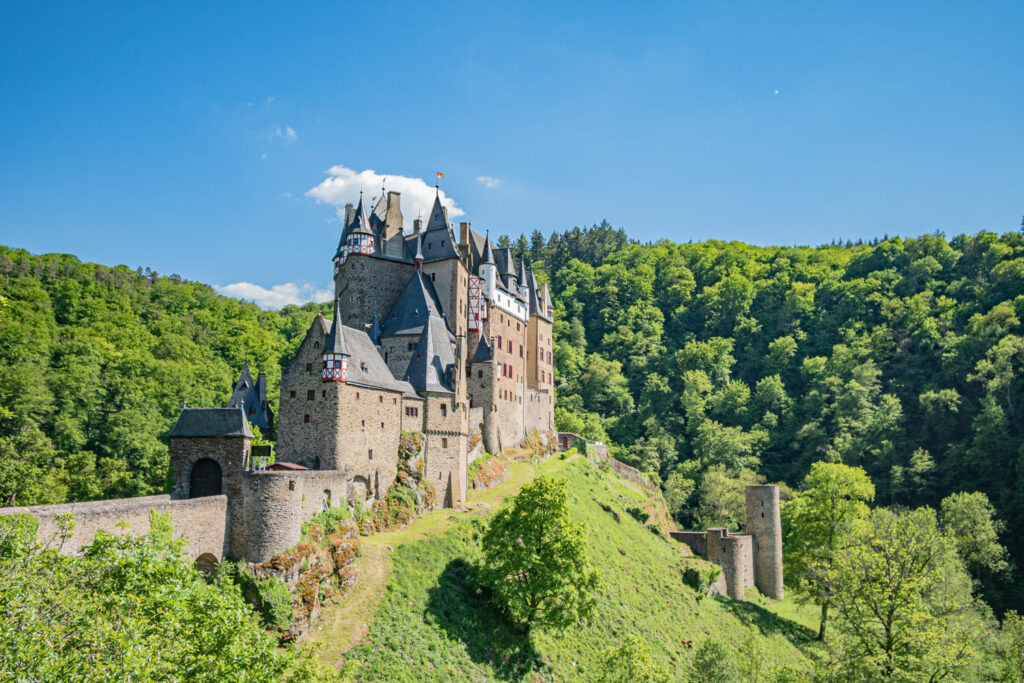 The family "von und zu Eltz" have owned the Randhausburg, which today consists of eight towers built around a courtyard, for 800 years. Up to 100 family members once lived in the towers in almost as many rooms. A 70-meter-high (76.5 yards) elliptical rock head, washed on three sides by the Eltz River, serves as the castle's foundation. In 1268, the brothers Elias, Wilhelm and Theoderich divided the castle and estates for the first time.

In 1331, Elector Balduin of Trier had the Trutz- or Baldeneltz built on a rock in front of the castle. From there he bombarded Burg Eltz with stone balls, as they can still be seen in the inner courtyard today. Balduin cut off the supply routes and forced the Eltzers to give up in 1333.

In 1336 the Eltz Peace was concluded. In 1354 Emperor Charles IV gave the castle of Eltz to Balduin as a fief. The Hochfreien von Eltz thus became feudatories from free imperial knights. The Eltz feud was the only military conflict of importance in the history of the castle.

The possessions of the von Eltz were extensive. The Eltzer courts at Koblenz, Trier, Boppard, Würzburg, Mainz or Eltville indicate the interests of the house. In 1736, the family acquired the dominion of Vukovar in Eastern Slavonia (Croatia). In 1717 Prince Eugene had driven the Turks back as far as Belgrade. In the following decades, the settlement of the largely depopulated conquered territories began. Vukovar was the most important possession of the von Eltz family. From the middle of the 19th century until the expulsion and internment of Germans in concentration camps by Tito in 1944, the dominion of Vukovar was the main residence of the Eltz line of the Golden Lion. Since the Second World War, the vom goldenen Löwen have lived in the Eltzer Hof at Eltville on the Rhine. There was nothing left of the Eltz castle in Vukovar on the Danube after the Balkan War. There was hardly a habitable house left in the town on the border between Croatia and Serbia.

The current owner of the castle, Count Jakob von und zu Eltz-Kempenich, called Faust von Stromberg, lives in Eltville, where his family has a world-renowned winery. Administrators have lived at Eltz Castle since the middle of the 18th century.

The people of Mosel have long been dependent on the landlords of Eltz. But in hard times, like the 30-year war or the Second World War, the castle has given them protection.

Send a request
To our packages

This website uses cookies to improve your experience while you navigate through the website. Out of these, the cookies that are categorized as necessary are stored on your browser as they are essential for the working of basic functionalities of the website. We also use third-party cookies that help us analyze and understand how you use this website. These cookies will be stored in your browser only with your consent. You also have the option to opt-out of these cookies. But opting out of some of these cookies may affect your browsing experience.
Necessary Always Enabled
Necessary cookies are absolutely essential for the website to function properly. These cookies ensure basic functionalities and security features of the website, anonymously.
Functional
Functional cookies help to perform certain functionalities like sharing the content of the website on social media platforms, collect feedbacks, and other third-party features.
Performance
Performance cookies are used to understand and analyze the key performance indexes of the website which helps in delivering a better user experience for the visitors.
Analytics
Analytical cookies are used to understand how visitors interact with the website. These cookies help provide information on metrics the number of visitors, bounce rate, traffic source, etc.
Advertisement
Advertisement cookies are used to provide visitors with relevant ads and marketing campaigns. These cookies track visitors across websites and collect information to provide customized ads.
Others
Other uncategorized cookies are those that are being analyzed and have not been classified into a category as yet.
SAVE & ACCEPT